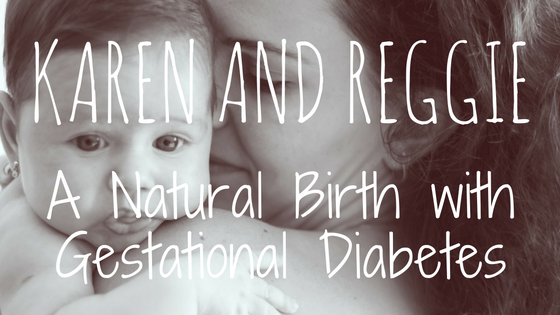 A Natural Birth with Gestational Diabetes – Karen and Reggie

“I am finally sending you my birth story (hooray!). Sorry it’s a little bit overdue but I don’t think I realised just how much hard work a new born baby is!

So as you know I was told I have mild gestational diabetes and as a result my consultant was reluctant for me to go over my due date citing that there was an increased risk of sudden placental failure and so I was booked in to be induced on my due date, Saturday 13 August.

I wasn’t keen to be induced so tried lots of more ‘natural’ things to try and get my labour going before my due date – long walks, eating pineapple, hot curries, reflexology sessions, driving over speed bumps at speed etc but unfortunately baby did not want to meet us early.

So off Jake and I trotted to the Royal Derby hospital on a sunny Saturday afternoon.  I was still not comfortable with being induced so we thought we would ask to find out a little bit more about our options before starting any procedures and went armed with lots of negotiating tools and possible alternatives.

On this occasion the hospital staff were really great.  I told them that I felt uncomfortable at the thought of being induced and the doctor asked me why this was.  I explained that my understanding was that once the induction process started I would be committed to it and the timeframes they have for each element of the induction process (after x many hours of the pessary having to go on the synthetic oxytocin hormone drip which would limit my opportunity to have a water or active birth).  I enquired if I could be monitored on a daily basis as an alternative and she said this was an option but would not pick up on the main risk of sudden placental failure (the clue is in the name – ‘sudden’).

The doctor was encouraging of me having an active birthand said she would do whatever she could to assist in that regard.  She was also encouraging of me using the birth pool but recommended that I got out of the water to give birth (though I am not quite sure why?).  She explained the induction process and assured me that they would give me as much time as I needed and I could even have a break of a day after the pessary to see if things would progress naturally before having second pessary if required.  It was her very strong recommendation that I be induced as I would be in the right place and under constant monitoring if there were any complications and the longer after my due date the induction was started the higher the risk, particularly if we were to approach induction on a slower basis.

After much deliberation Jake and I decided that I would be induced (the fear of ‘on our heads be it’ was the driving factor – I can’t imagine any parent wanting that on their conscience).  I had a pessary inserted at around 4pm, which was not a particularly pleasant experience and as a result of which I said that I didn’t want to have unnecessary/too many VE’s.  I was told that my cervix was quite hard so we would probably be in for the long haul (the lady in the bed next to me had had her pessary in for 30 hours with no progress). Jake and I decided to relax a bit and kill some time watching a movie on our tablet.

Around 8pm I was getting a bit of cabin fever so we decided to go for a walk around the hospital grounds. Whilst walking round I suddenly got some stomach cramps – like really really bad period pain- so we headed back to the induction ward.  I was a little bit unsure as to whether these were contractions as I didn’t feel that my uterus was tightening as such, like I said it was just like really bad period pain so I didn’t think too much of it and thought it might be just very early labour (I’d been having slight stomach cramps for the 2-3 days prior) – I think in hindsight they were contractions though!

Jake and I started doing some of the active birth movement we learnt in your workshops – Jake was really in his element in his role of ‘birth manager’ and was fantastic – lots of hip circles, leaning over the birthball and ocean, ha and bee breaths!  After a while I was in quite a lot of pain so asked if I could have anything and was given some paracetamol.  The midwife also offered me a hot bath which I gladly accepted and was amazing!  The only problem was that once I was out of the bath the pain was still there and had worsened. Jake and I continued with the massage, moves and breathing techniques we had learnt on the course and during the classes and I think they really helped focus my mind and distract from the some of the pain.

Around midnight I asked if I could have some gas and air but was told that this generally wasn’t available on the induction ward – when I was moved to the labour ward I could access it unless the pain got unbearable in which case I suspect they may have tried to do something more to assist.  I was offered oramorph, which if I’m honest I didn’t know much about but was desperate to have something to take the edge off the pain so took it.  I think this made me quite sleepy and I must have nodded off around 1am only to wake up at around 4.30am in complete agony asking Jake to help me but he was snoring in the corner.  A midwife came and asked me if I was OK to which I said ‘not really – I think I need some help’.  I think the hip circles must have really worked their magic as the midwife who was looking after me came and checked me and told me I was 8cm dilated (I guess the downside of saying you don’t want to have many VE’s is that you don’t know how much progress you have made) and I was moved into a labour room (I completely forgot about the birth pool and all thoughts about the birth plan went out of the window).

To be honest the rest of my labour was a bit of a blur.  Because I had had very little by way of pain relief I think I may have gone a bit overboard on the gas and air and was a little bit on the delirious side.  I was also really exhausted by this point (I hadn’t slept much the night before as I was mulling over the whole induction thing). However, Jake stepped up and was fantastic in giving me instructions on positions to get into and breathing techniques which really helped. I don’t think he would have been able to do this had he not gone to the birthing workshop.

After a lot of huffing and puffing (and swearing) I eventually gave birth to a little boy, Reggie, at 7.57am weighing 6lb 4oz.  I was fortunate enough not to require an episiotomy and only tore very slightly so stitches were not required (I put this down to all the yoga stretches we did in class!).

I just wanted to say thank you for all your advice and support throughout my pregnancy.  I think I may have mentioned that I am quite a wimp and in the past have fainted at the thought of blood! Thanks to the classes and workshop I felt really well informed on what to expect and much calmer about how to approach induction and labour which made the whole experience much more enjoyable than I ever thought it would be. We now have a beautiful baby boy and (despite the sleepless nights) we couldn’t be happier! THANK YOU!

I will miss coming to the pregnancy yoga classes but am really looking forward to the next chapter and starting the baby massage and baby yoga classes when Reggie is old enough.

Good luck to all the other yogini mammas – hope you all enjoy the rest of your pregnancies and have safe birthing experiences.”