The Outdated Language of Birth 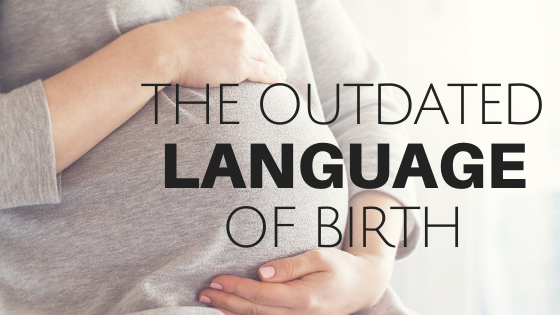 These are just some of the terms regularly used to describe the pregnancy and birth process. These medical phrases can often be dehumanising, demoralising, downheartening and even insulting. I remember my cousin being outraged at the label of ‘geriatric pregnancy’ with her third child whilst she was in her late 30s. She is now 66, her geriatric baby has children of his own, and she still doesn’t feel geriatric in the slightest!

Many of these medical terms originated in the last Century, at a time when obstetrics was a man’s world. The overiding ideal was that a woman’s body was merely the vessel for pregnancy and birth, that women had no wisdom of their own, and only (male) medical professionals could understand the process of pregnancy and childbirth (despite never actually experiencing it).

Elements of the language, still in use today, seem to point the finger of blame directly at the mother, with words like ‘failure’ being common in maternal medical vocabularly. A common example of this is the frequently heard “failure to progress” where labour, often naturally and spontaneously, slows down. Because the word ‘failure’ is employed, a cascade of medical interventions often ensue without waiting to see if there is, indeed, any physiological necessity to intervene.

So it was with great interest that I read about a recent attempt to highlight these outmoded phrases. The Renaming Revolution is a glossary of preferred terminology, attempting to place autonomy and power back into the hands of the Mother-to-Be by offering alternative phrases. You can read about it HERE.

Whilst I would argue that not all the alternatives are ideal, this at least starts the conversation about how fertility, pregnancy, childbirth and motherhood can become more woman-centric, where the experiences of each individual mother are the most valid ones.