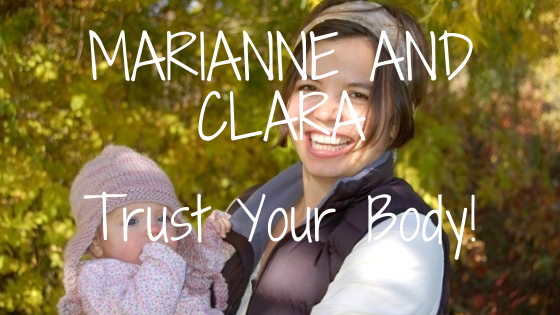 Marianne and Clara – How Trusting your Body in Labour really works.

After 7 weeks of wonderful toddler and newborn chaos,  I’ve finally found some time to finish my birth story email 🙂

I know you sometimes read these out to lots of new mums-to-be in your class so I just wanted to say you are completely right and it is so important to TRUST what your body is telling you. After two births now, I really noticed this time around that having the confidence to trust your body and know that you will cope to deliver your beautiful baby helps so much.

At about 2am on the 28th December I started getting early contraction aches and sometime after that, the mucus plug departed so I knew it was definitely on…. but I was so tired I somehow went back to sleep!! Could never have imagined that with my first- I was far too to nervous & pumped with adrenaline I think!

Got up with my toddler the following morning with only light pains but rowdy toddlers with a stack of new xmas pressies to play with and labour don’t mix so things had all but stopped by 9:30am. So hubby took toddler out for a play and I rested with a cuppa.

Things were back on by 10:30 and plenty of walking, ujjayi breathing and hip circles/sways during contractions helped me get to 12pm & then I felt I should call in. The breathing was obviously helping as they weren’t sure whether I should come in but I felt ready and said I’d like to do they asked me to ‘pop in’.

Hubby & family clearly thought I sounded too calm too as my folks took ages to travel the 15 minutes to our house and my husband decided he had time to finish lunch & tidy up! (I’d normally praise such tidiness but there are limits!)

We arrived at hospital at 13:30 and my waters went getting out of the car (lovely). I slowly made my way up to the maternity ward with lots of pauses and again plenty of ujjayi and hip circles during the increasing contractions. Think people walking past thought I was mad but I couldn’t have cared less!!

Got in to be examined and midwife made chitchat with my husband but I didn’t want to talk much! When they got to finally checking how dilated I was…. I was 8cm!! I have never seen a maternity ward move so fast as my first took ages 🙂

They got me into delivery suit and due to some complications, a water birth was out and I needed an IV…which was administered in minutes. By this point I was kneeling on the bed with the back rest up to lean on, making good use of the gas and air and still doing those hip circles 😉 I’d moved to straw breath by this point though as I just found this easier.

The midwife was great and just told me to ‘go with it’ and that was exactly what I needed to hear as I just trusted myself to listen to my body. I screamed if I wanted, only pushed when I felt ready with each contraction, paused when I needed too and breathed throughout.

I don’t want to paint a false picture to any new mums-to-be, the pressure was intense and I felt it more this time as I hadn’t got the water to relieve it like I had with my first but in an odd way that helped as I felt more and was more in tune with what I needed to do.

I know second babies are generally quicker and at 15:27 our beautiful little girl arrived into the world (just 2 hours after we got to the hospital) and I was having tea & toast and a cuddle by 4pm! I struggled to birth the placenta but that was common with both my births and after trying, I didn’t wait as long to try with this one so I could do skin-to-skin which I did for hours before I finally got her dressed. She also spent nearly all the night on my chest so I could keep an eye on her as she’d got lots of sticky stuff that needed to come out & I think we both felt calmer for it.

I also wanted to say thank you for all your advice and training! I know some of the confidence came from having gone through labour before but knowing I had the tools to mange the pain and to trust myself made the world of difference xxxx”